Social media sites are used and loved by millions of people worldwide, with new social platforms launching each year. Excessive social media activity, however, can lead to addiction and other mental health disorders.

If you or your loved ones have experienced negative mental health effects due to social media usage, you may be eligible to participate in a social media harm lawsuit.

Why Social Media Harm Is Leading to Lawsuits Social media harm lawsuits have been on the rise in recent years, as important links are continually discovered between social media engagement and its impact on mental health.

These lawsuits state that social media platforms apply algorithms that both promote addiction and prey on vulnerable users. They also note that these platforms encourage these harmful behaviors in order to generate revenue.

In 2021, Frances Haugen, a former Facebook employee, served as a whistleblower to uncover these secrets. Haugen released internal research that exposed the social media platform publicly as a company that puts profits above public safety and information accuracy.

People who have been affected by social media may be able to file what is known as a product liability lawsuit.

In October 2022, the Judicial Panel on Multidistrict Litigation agreed to centralize all social media addiction lawsuits into an MDL (multidistrict litigation), assigned to the northern district of California.

An MDL is similar to a class action lawsuit in that it represents many injured parties simultaneously against the same plaintiffs. The difference, however, is that each case is weighed separately in an MDL — whereas in a class action suit, the whole class wins, loses, or settles together.

If you or your loved ones have experienced negative mental health effects due to social media usage, we may be able to help.

Who Is Eligible to Start a Social Media Harm Lawsuit?

You may be eligible to take part in the social media addiction MDL if you or a loved one have experienced mental health issues as a result of social media use.

Parents or legal guardians may be eligible to file a suit on behalf of their minor children, including on behalf of any child or teenager who passed away as a result of social media use.

The first thing you should do when preparing to file a social media harm lawsuit is contact a personal injury lawyer and determine your eligibility for a lawsuit.

In addition to providing legal advice throughout the process, a personal injury attorney can help you gather and submit important documentation and ensure you meet all important criteria and deadlines.

What Types of Harm Can Social Media Cause?

Social media interactions can lead to a number of negative mental health effects, especially when used excessively and to the point of addiction by young users.

According to a recent study by the University of Georgia, teenagers — particularly males — who are addicted to social media are more likely to engage in cyberbullying.

The side effects of social media use can wreak havoc on a person’s mental health, particularly among young people who are already vulnerable to experiencing low self-esteem.

The risks of mental health disorders with social media usage are also higher with increased amounts of screen time.

Social media use can also lead to a distorted or unhealthy body image, which can in turn, lead to self-harm and mental illnesses.

Since social media can contribute to anxiety, depression, low self-esteem, and cyberbullying, it’s no surprise that social media interactions can lead to suicidal thoughts or actions.

Published in 2021, a 10-year study conducted by Brigham Young University found a correlation between the time teenage girls spent on social media sites and the risk of suicide. The more time these girls spent actively engaged with social media, the more likely they were to report suicidal thoughts or suicide attempts.

Who Is at Risk for Social Media Harm?

The group of people most at risk for social media harm are teens and young adults, and they are also the most likely to fall victim to, as well as partake in, cyberbullying.

Young women also tend to be at a higher risk for social media harm compared to young men, and suicide rates are higher among female social media users.

Injuries from social media harm include anxiety, body dysmorphia, depression, and in the most severe cases, suicide.

In many states, damages must be more than purely mental in nature in order to qualify for financial compensation during a trial. For example, courts usually do not award compensation to those who suffer from anxiety alone.

However, if their anxiety has caused them to lose sleep, hurt themselves, require increased therapy, or stop eating, then that manifestation of anxiety can lead to an award of damages.

Damages claimed in social media harm lawsuits may include:

What’s the Settlement Value of a Social Media Harm Claim?

While it may not be possible to know the exact settlement amount you may recover, a lawyer can assess whether you have a case, identify damages, and provide a case value estimate.

How a Product Liability Lawyer Can Help

By working with a product liability lawyer, you have access to their law firm’s resources and wealth of knowledge about similar cases.

You are also guaranteed a private and confidential attorney-client relationship that you can rely on and trust.

A free consultation through LawFirm.com can get you started and help you determine your eligibility for a social media harm lawsuit.

If you or your loved ones have experienced negative mental health effects due to social media usage, we may be able to help.

Find the Right Lawyer for a Social Media Harm Lawsuit

If you or your loved ones have been plagued with mental health issues after using social media or from exposure to harmful content featured on social media, you may be eligible to file a social media harm lawsuit.

At LawFirm.com, we are dedicated to helping you find the right personal injury attorney for your lawsuit.

Contact us today for a free case evaluation to find a top personal injury lawyer in your area.

Does social media do more harm than good?

The answer to this question is a matter of opinion at this point, as there is strong evidence to suggest social media can cause both good and harmful outcomes, depending on many factors.

There is research to suggest, however, that the negative mental health outcomes of social media are on a steady rise.

Can you sue a social media company?

It is not ordinarily possible for people to file lawsuits directly against social media companies like Meta Platforms, Inc. and Snap, Inc.

What is a social media lawsuit?

A social media lawsuit is a claim that alleges a person’s mental health issues or problems can be directly linked to their usage of social media platforms like Facebook, Snapchat, and TikTok.

Further, it is alleged that the involved social media corporations were aware of the risks and dangers behind their platforms — and directly targeted vulnerable young people regardless of the potential for harm. 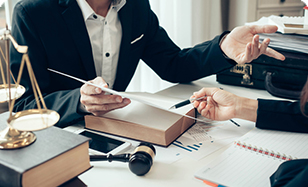